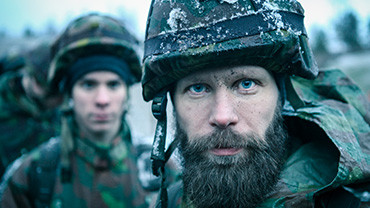 Eero Aho in the role of Rokka

The actors for nine of the most central roles in Aku Louhimies’ film UNKNOWN SOLDIER have now been chosen. Eero Aho, an internationally acclaimed actor will play the role of Corporal Rokka.

Louhimies’ film is based on not only the classic novel of the same name, but also on Väinö Linna’s original version, Sotaromaani (The War Novel). Production of the film has already begun, with initial training camps and test shootings located on the militry area of Vekaranjärvi.

“We strive for realism and accuracy in describing history. This group of actors will be made in to a real team – and will carry a great responsibility for the final overall result. Their physical fitness has been improved, in part by attending training camps by The National Defense Training Association, and they have become acquainted with the life of a soldier – both on the land and in the barracks. During the shoots the actors will live in the forest in tents, take care of their own equipment and eat the food of Leijona Catering – like real privates.” says Louhimies.

Heikki Rotko, the chair of the board of the film’s production company Suomi 2017, is pleased with both the level of international interest in the film and the wide network of partners: “The Unknown Soldier offers a unique platform for cooperation. We’re building an experience which will potentially reach every Finn. The international interest has also been significant. Aku’s recent work for Ireland’s broadcasting company RTÉ, Rebellion, has opened doors to new discussions about international distribution for UNKNOWN SOLDIER.”