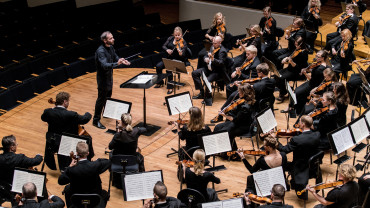 The recording of the music for UNKNOWN SOLDIER is currently taking place in Lahti.

The recording of the music for UNKNOWN SOLDIER is currently taking place in Lahti. The music for the film is performed by Sinfonia Lahti, led by Dima Slobodeniouk, the orchestra’s principal conductor and the artistic director of the Sibelius Festival.

Sinfonia Lahti (Lahti Symphony Orchestra) is known for several renowned international tours and various exceptional recording projects, for which it has received numerous gold and platinum records and international awards.
Dima Slobodeniouk, a Russian-born graduate of Sibelius Academy, has led Sinfonia Lahti since the fall of 2016. Slobodeniouk has been lauded for his intelligent artistic leadership and has featured prominently in various concert arenas internationally.

– It is an honor to be a part of this great film with Sinfonia Lahti during the centennial year of Finland’s independence. Especially as recording music for a film with a symphony orchestra is rare in Finland, Slobodeniouk says.

The music for the film was composed by Lasse Enersen, also a former student of Sibelius Academy. Enersen has worked as a ghost composer for many Hollywood composers and his string arrangements can be heard in many Finnish top-artists’ songs. Enersen’s latest film composition was Tom of Finland (2017).

Recordings for Finnish films that require a symphony orchestra are usually done outside of the country for cost reasons. However, the music for The Unknown Soldier is being recorded at the Sibelius Hall, which is known for excellent acoustics. Sibelius Hall is the home of Sinfonia Lahti, perhaps the best-known Finnish orchestra internationally. The cooperation with Sinfonia Lahti and the composer Enersen as well as recording in Finland are very important to Aku Louhimies, the director of the film.

– I am very glad for the opportunity to work with a Finnish orchestra and a Finnish composer. It is especially important to us with The Unknown Soldier that the music composed for the film is also recorded in Finland, Louhimies emphasizes.

– Having access to this type of expertise at the international level in Finland is magnificent.

UNKNOWN SOLDIER by Aku Louhimies is the largest Finnish language film ever produced. The film that was shot in various parts of the country is now being edited and will have its nation-wide premiere on October 27, 2017. Tickets for previews will be on sale throughout the country October 23–26, 2017. Additional information about the film is available at www.tuntematonsotilas2017.fi.