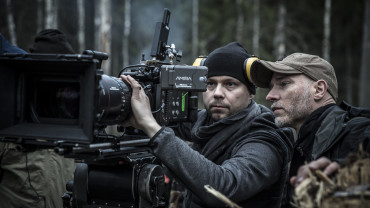 THE FILMING OF THE MOVIE STARTS ON MONDAY

In the first week of filming there will be over one hundred extras.

Filming for Aku Louhimies’ movie UNKNOWN SOLDIER will start on Monday 6.6.2016 in Hamina. Along with the male stars of this much-anticipated production we will see Paula Vesala as Lyyti – the wife of Rokka, a Karelian farmer.

In addition to the actors announced in April, Samuli Vauramo will play the role of Lieutenant Lammio, and Matti Ristinen will play Major Sarastie. Playing the movie’s main female role will be Paula Vesala as Lyyti. Severi Saarinen will play Sergeant Lehto and Eino Heiskanen will have the role of Private Ritaoja. Private Määttä will be played by Max Ovaska and Private Ukkola by Elias Gould. Private Salo will be played by Akseli Kouki and Corporal Mielonen by Hemmo Karja.

Director Aku Louhimies comments that ’Each of Linna’s characters are accurately and carefully depicted as people ravaged by their war experiences. I am very proud of how each and every actor in this film has immersed themselves in studying how fear, pain, missing home and the constant threat of death affects a person. I want to bring forth the war on the home front, and women who have carried the weight of broken homes.’

Louhimies and the actors have prepared for the filming of movie that premieres in October 2017 by participating in training camps with the Finnish Defense Forces during this past winter and spring. ’The actors have had a good team spirit throughout the training, especially during this last – particularly difficult – training in the end of May. The actors have developed a true sense of war time, where they have for example carried military equipment across rough terrains. They have been really supportive team members and a lot of progress has occurred.’ says Veijo Rautio a long time Instructor in the Finnish Defense Forces.

In the first week of filming there will be over one hundred extras. Through the open search at Veikkaus, a Finnish National Betting Agency, over 14 000 volunteers have applied. Some volunteers are still to be selected, especially volunteers that have experience with horses. Historically accurate Finnhorses as well as some shooting locations are still being scouted.

Hartwall and Land Rover partner up with The Unknown Soldier

The new partners of the movie are Hartwall and Land Rover. UNKNOWN SOLDIER – with a budget of over 7 million euros – is one of Finland’s largest productions ever.